I Loved This Book!

Just finished a book, “Velva Jean Learns to Drive,” by Jennifer Niven. I loved this book! At first I thought it was a humorous novel—the title is the reason I picked it up. A glance at the back cover dispelled that notion but didn’t put me off; I’m always up for a good 1930s Appalachian Mountains story that begins, “I was ten years old when I was saved for the first time. Even though Jesus himself never had much to do with religion before he was twelve, I had prayed and prayed to be saved so that I wouldn’t go to hell.”

Some books are very put-downable. Not this one. The author creates a wonderful main character, an entire town, a world, and I was wrapped up in it. When the book ended I looked up the author to see what else she’s written. Sadly, no other fiction, although she is writing a sequel—but she’s written a few non-fiction books about female adventurers. I’ll try those even though I’m not a fan of true stories. (Reading them or telling them, right?)

I don’t know how to categorize the novel; it’s not a thriller, not a murder mystery, not a romance, not literary genius of the sort I find incomprehensible. It doesn’t fit in any category I can define. For those of you who’ve asked me what kind of book I like best, this is it—a great story.

So, what’s your favorite story? What book grabbed you and didn’t let you go, kept you thinking about that world long after you put the book away and started another? Do you have a “Velva Jean” in your fave list?
Posted by Valerie Keiser Norris at 3:00 PM 5 comments:

You know the romance is gone when your sweetheart asks you to postpone vacuuming so he can clip his toenails first. Eeyew!

I’m not a big romance reader. I had a brief affair with “bodice rippers” in the late 70s/early 80s, when my days were spent diapering and wiping slobber, but that can be understood, right? I kind of wanted a hero to come and drag me off to his love nest. But as a rule, I don’t read romances. I wish I could write them, as they’re the biggest market share of novels being published these days. But I just can’t write those scenes. I’m afraid my eye-rolling would be evident in the writing.

Just read a book called “The Beach House” by Mary Alice Monroe (Jackie Swanson, thank you so much for sending it to me!). Various plot lines ran through it, including a romance. That’s the kind of romance I like. The hero wasn’t a brooding, misunderstood man, the heroine wasn’t the most beautiful girl in the world, and the romance wasn’t central to the plot. Actually, the romance was a little too understated even for me—at one point she’s throwing herself at him, and then the story skips over weeks when they spend time together, and doesn’t mention anything about the relationship. Hello, isn’t the main character even wondering why he thwarted her moves? And what’s she doing, throwing herself at him like that? Have some dignity, girl!

What’s your romance meter? Ladle it on like marinara on meatballs? A little splash, like white wine in a lemon-butter sauce? (Why do my analogies involve food, hmm?) Let me know your thoughts. Name names (titles, authors) if you wish. And by the way, my sweetheart brought home a dozen roses last night, so I guess I’ll forgive the toenail thing. Again.
Posted by Valerie Keiser Norris at 12:06 PM 4 comments: 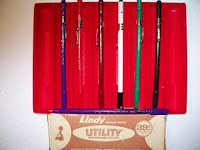 I’m a pen freak. There, I’ve said it out loud. Yes, I like pens, and have an assortment of colors and styles in a pencil cup on top of my desk. I have my favorites, mostly Pilot G-2 Extra Fine gel ink pens in assorted colors. When I used to write all my stories in longhand (as recently as last year), the gel pens gave me fewer hand cramps than ballpoint pens.

Over the years I’ve dallied with an array of pens. I remember a stick pen called a Lindy, a long, no frills, no curves ballpoint pen in the 70s, I guess. I’d probably still have some—I’m a loyal sort—but they went the way of Ipana toothpaste and 45 records. If fountain pens didn’t dry out so quickly I’d use them—and for awhile, I did. But I spent more time scribbling warm-up loops or running water over dried-out pen nibs than writing.

Upon borrowing an unusual pen from a man, I oohed and aahed and mentioned that I was a pen freak. Quickly I learned that my affection for pens was of the puppy-love variety, while his was full-blown crazy love. Did you know there were pen shows (think boat shows for pen enthusiasts) in LA, Philadelphia, Atlanta, Chicago? Even Arkansas has a pen show. You can get custom made pens, replicas of “famous” pens, special pen holders, etc.

You won’t see me at a pen show. I love pens, but I love to pay my mortgage more.

What are some of your little joys, your little puppy loves in life? Or are you more like the pen freak, with huge love for something most people don’t think twice about? Let me know. I won’t think you’re weird. Unless it’s something really out there, and then all bets are off.
Posted by Valerie Keiser Norris at 3:08 PM 4 comments:

Valerie Keiser Norris
I love people who make me laugh, love to have fun. Have won several writing awards, most recently the 2015 Carrie McCray Literary Memorial Contest in nonfiction, also the 2013 Hub City/EMRYS Creative Writing award for fiction and the Carrie McCray 2009 contest in fiction. My short stories have been published in journals and magazines. "All Foam, No Beer," was published in SWEETER THAN TEA, a BelleBooks anthology. Nov. 2014 my story, "Stone Mountain Christmas Dreams" was published in A STONE MOUNTAIN CHRISTMAS, a Gilded Dragonfly Books anthology. Both anthologies available on Amazon.com. Still waiting on that novel sale but I'm getting closer!

Other blogs to check out!